The first Sunday of my summer break…

Lazy marshmallow clouds are masking the azure sky and bright June sun. The rustling leaves and cheerful birds creating a calming chorus. The nearby horses are talkative today. Under an oak leaf canopy, I’m sitting in my blue Adirondack chair listening and watching the world around me. Ants tickling my toes, and butterflies fluttering across the clover blossoms. Belle is resting beside me while Rory and Opal watch from inside the house. I cannot recall when was my last relaxing day…

The air is cooler than usual for this time of year. Our mini orchard is producing fruits, and I’m thrilled at the promise of fresh pick home-grown taste.

There are branches that need trimming, weeds that need pulling, and grass that needs mowing. But, not today. Today, I sit and listen to the world around me…

Only one month after planting our mini orchard, these beauties appeared.

Three Apples changed the world. The first one tempted Eve, the second inspired Newton and the third was offered to the world half eaten by Steve Jobs. RIP
– Unknown

Our red delicious semi-dwarf tree is very happy in its new home. 🙂

Last year, Hubster & I planted four weeping cherry trees and a Japanese maple. One weeping cherry didn’t make it through the first year, but we had a one-year warranty and replaced it. While we were at the garden center, we decided to finally start our own mini orchard.

The past few weeks we’ve been busy planting, mulching, and watering our 12 new trees. Two were ornamental; the weeping cherry and an Eastern redbud.

Own Own Mini Orchard 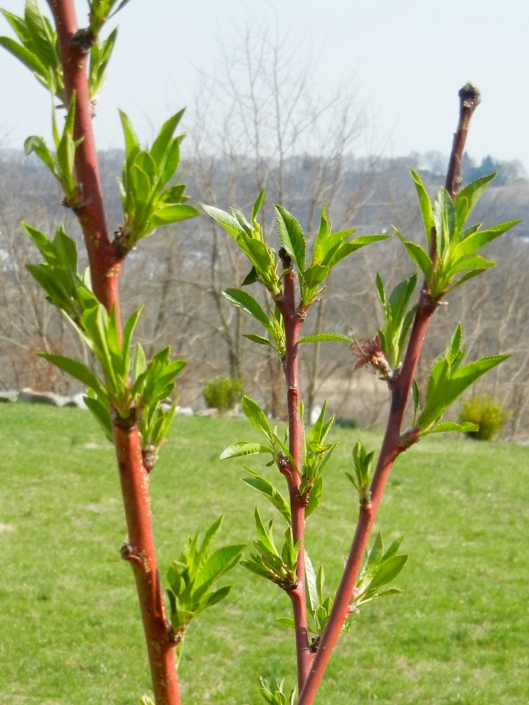 Foliage is Filling In

The foliage is already filling in nicely, and some small blooms have appeared. I’ll post an update once they’re a little more established.