For the dining table centerpiece, I fill a vase or bowl with cranberries and arrange seasonal color flowers. I like to keep the bouquets low so conversation can flow (and kids can see too). I also cluster several votive cups on the table (making sure not to use scented candles). I make a small complimentary bouquet for the entry way. 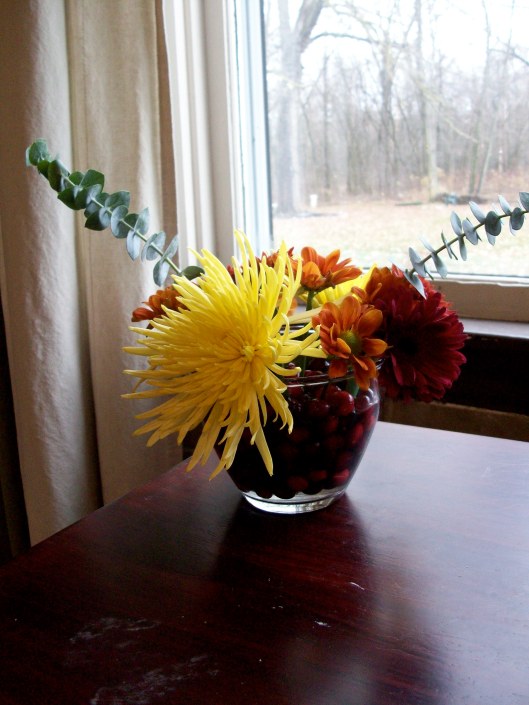 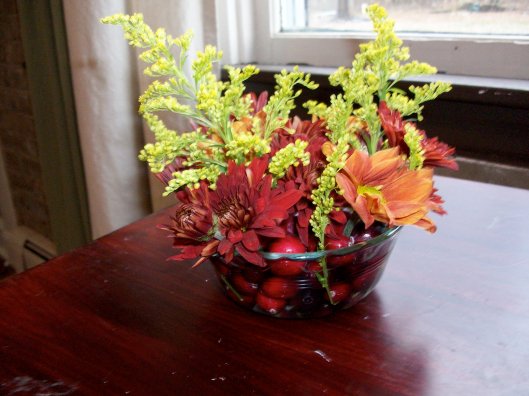 Through out the holidays, I keep a few centerpieces that double as snacks. I keep a trifle bowl filled with mixed nuts and another one filled with clementines and golden delicious apples.

This year I was lucky enough to snip a few pink and yellow roses for my small bud vases in the living room and bathroom, I added some twister rush to fill out the vase.

I’m looking at the heather blooming outside my window and contemplating gathering some to bring it inside.

During a recent thunderstorm several of my gladiola stems snapped. Being away for a few weeks, I didn’t stake the long stems for support. On the positive side, I was going to be cutting some for inside my home anyway. People often ask how I take care of my gorgeous gladiolas, so I’m going to point out a few things I use and know.

Winterize?
I purchased hardy gladiolas when I planted them in my perennial garden. I also was worried about the bulbs or corms and took extra precaution, the soil around my gladiolas in covered with black plastic (to keep in the heat and weed free) and the entire area is covered with a nice layer of mulch. I just wait until the foliage is dried, before cutting off the dead leaves from the corms. If you do not purchase the hardy gladiolas, them you’ll need to dig them up in the fall (before frost) and store them in a paper bag in the garage or basement.

Sunlight
My gladiolas get sunlight first thing in the morning until about 5p.m. and that keeps them very happy. Try to plant yours where they’ll get

Cuttings
If you’re going to be using them for cuttings, cut the stem as soon as the first flower blooms. They should last about two weeks. To keep my cuttings looking top notch, I check them each day and pull out the withered blooms. If you was all of the flowers to bloom at once, tear off the top flower and all of the flowers will open with the next day. The weight and height of the gladiolas can often be troublesome and tip vases, however I anchor mine with river rocks in the bottom of the vase (adding more rocks for each additional stem I add).

Blooms in my Bathroom

If you do dig up your bulbs, you will want to plant them after the last frost in the spring, about 4″-6″ deep. You can stagger the bloom time by planting a few bulbs every two weeks. My first year, I did this and I had gladiolas from mid-June through early September. This will also allow for longer cuttings.

To See of Not to Seed
If you cut off the spent stalk after all flowers have bloomed, you will prevent it from seeding. If you allow the fertilized flowers to create seed pods, remember that’s taking energy away needed for next year’s bloom. If I’m encouraging seed pods, I only allow one per stalk. Wait until they are mature before harvesting. I plant them in the fall immediately (usually August or September). Planting from seeds is much different than planting from corms. The first year I usually just get foliage (remember let it brown before cutting), the second year I get a few small blooms and by the third year, the foliage is covered in new mid-sized blooms. This method is for the patient. Of course you can propagate gladiolas from the corms, however I prefer the seed method.

Disease
As soon as you see infected foliage, cut off infected area immediately.

Do you prefer the gladiolas in the garden or in the vase? Which color is your favorite (I’d love white ones eventually..)?