Friday night dinners were my favorite part of the week with Hubster. It was the one night I had enough time to try a new recipe (other than a quick meal recipe during the week). However with our son’s sports and activities, we often spend the weekend at my MIL’s and no longer have Friday night dinners together at home. We’re often at my MIL’s for Friday night or if I’m home alone (due to hunting season) I whip up something quick (usually leftovers).  I decided I reinstate Friday Night Dinner again, even if it is now Thursday Night Dinner.

Sautéed Spinach
I used the same pan to sauté the spinach with a fresh drizzle of EVOO, balsamic vinegar, fresh garlic, artichoke hearts and cranraisins. Just before I transferred the spinach to the plate, I sprinkled it with Feta cheese.

Mustard Sauce
I didn’t make my mustard sauce from scratch, instead I grabbed a glob of spicy brown mustard, mustard seeds, a bunch of dill weed and a cup of cream. I mixed them together and heated until warm. I poured the mustard sauce over the pecan encrusted chicken and promptly served my Thursday Night Dinner.

Baked Sweet Potatoes
I scrubbed two sweet potatoes and made a slit down the middle. I baked them in the oven, putting a little butter and cinnamon in the middle slit 10 minutes before they were ready. 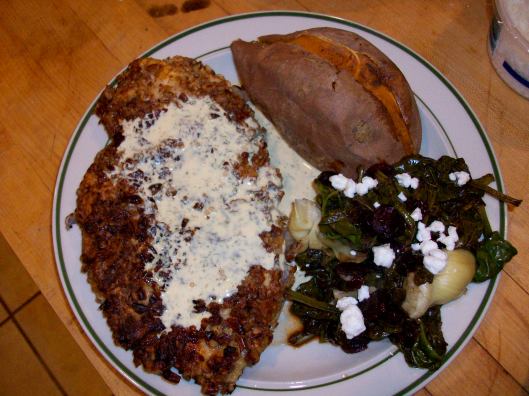 I served dinner with fresh french bread and the table was graced with a beautiful centerpiece. I guess Hubster was thinking the same thing about Thursday night, because today he surprised me by sending a dozen light pink roses to me at work with a note that read “Thank you, from your secret admirer”… He can be romantic from time to time. 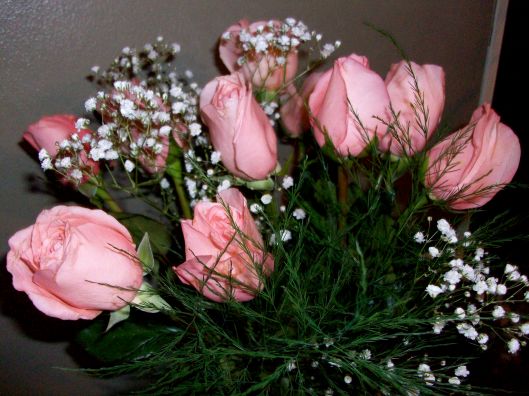