Don’t get confused, yes, I used a similar title for a earlier post. Same concept, my other best friend is the lucky mother-to-be this time. As soon as her pregnancy was confirmed, her sister and I began planning her baby shower (being the planners we were). We decided where to have it (church basement) and when (May). We both loved the build-a-library (look here for book suggestions) concept for the shower; every guest brings a baby book and writes a message for the baby inside, in lieu of a shower card. Her sister quickly selected invitations, decorations, plates and cutlery. We talked about the favors and food. We also made a pact not to play the gross poopy diaper game.

The main colors on the invitations were green and purple. Since my BFF is having a boy, I decided to incorporate the purple but play it down using more green and adding blue. I carried this color palette into the desserts and favors.

I thought it would be a good idea to serve tiny food to go along with the baby theme. Fingers food are always easy at showers and parties. I thought that sandwiches wouldn’t keep (if made ahead of time) or travel well. So I asked my BFF’s sister to order the sandwich trays for the shower and get the ice.

Desserts & Centerpieces
I immediately planned to make white chocolate lollipops in the form of baby carriages and baby bottles for the favors. My BFF is planning an

My BFF has an airplane theme for the nursery (her husband is a pilot) and I wanted to reflect that in the shower somehow. I found cute airplane candy molds and made airplane gummi candy in the shower colors.

I made chocolate topped pretzels (stolen idea from my other BFF’s sister) that continued the colors.

Something I wanted to include, but didn’t have time to make was mini eclairs and mini cream puffs. They were store-bought and somehow didn’t disappear like the rest of my food.

Once again I got to pull out my cupcake tree and icing press, to make cupcakes that were just as appeasing to the eyes as they were to the palette.

I made brownie bites with cream cheese frosting (I believe the desserts are becoming my signature for baby showers).

Food & Snacks
I thought the vegetable tray would be very fun if it was stocked with baby veggies; baby carrots, baby corn, cherry tomatoes, mini cucumbers, baby and mini bell peppers. The veggies were served with my ranch dip which is way better than any store-bought dip and just as easy. 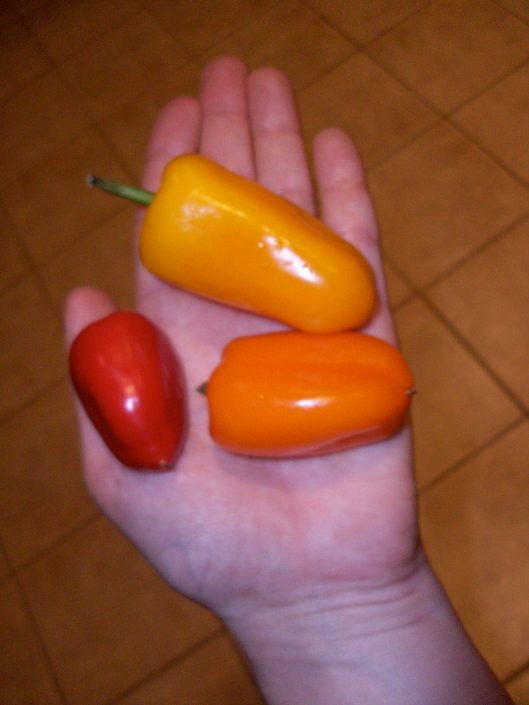 I made grape and cheddar kabobs and served them with a honey lime yogurt dip (and idea stolen from my other BFF).

Caprese Kabobs were an easy was to turn the classic salad into a finger food.

I made mini Quiche ahead of time, as I could heat them quickly before serving. Some were turkey ham & cheddar, some were plain swiss.

The salmon puffs (one of my favorites) were a big hit and disappeared quickly.

I served hot cocktail weenies in a sweet chilli sauce.

I prepped Teriyaki chicken skewers, marinated for 24 hours ahead of time. I grilled them before hand and heated them quickly before serving.

Sweet and Sour Meatballs were served, with three meatballs skewers on a stick.

Tea sandwiches do not travel well, so I asked her sister to order a tray for the shower. I had baby gherkins and baby dill pickles to serve with them.

Beverages
I served lemonade and iced-tea in 3 gallon dispensers. I provided half pint water bottles and mini orange juice containers in an iced galvanized tub.

Several people asked me for my business card, many people asked for recipes and almost everyone complimented me on something they ate. The ultimate compliment I actually heard several times, “This is the nicest shower I’ve ever been to.” I so glad that my Bff’s sister and I were able to give that to the momma-to-be.

I’ll share some photos over the next few days.

3 thoughts on “My BFF’s Baby Shower”

Leave Me Some Love Cancel reply